There are times when I seriously wonder about this site.

Three posts in December, two in November?  Frankly it is going nowhere.

There are times when I seriously wonder about the other site too.  Blogging can be a bit of a chore at times, and I confess I have been tempted to call it a day.  In fact, most days, I get up with a firm resolve to give it a rest, at least for a couple of days, if not longer.

But then the bug bites.

An idea comes into my head, and I have to write it down.  It is a strange compulsion, but it must be obeyed.  Quite often, I hate myself afterwards for my lack of resolve.

I have always had a small compulsion to write things down.  I kept a ‘journal’ (diaries are or women!!) for the best part of thirty seven years.  I never missed a day, despite all the entries being very similar.  The fact that I had nothing to write on any day never stopped me – I still had to write.  I finally stopped last summer, but that was simply because the medication I was on at the time made it next to impossible.  It’s difficult jutting down what you did in a day, when you can’t remember!

I suppose the reason I keep this site going is that it is doing no harm just sitting here.  I wouldn’t save anything by shutting it down, and in fact would lose a (tiny) income if I did.  I suppose my hope is that when the recession passes that advertising will improve?  Certainly, this site’s Alexa rankings have improved enormously, despite the lack of activity.  It has gone from 1,588,769 to 394,931 in a matter of three months which should improve any advertising chances?  Why it has risen so high is anyone’s guess.

If I shut down the other site, on the other hand, I would lose considerably.  Anyway, it is a handy outlet for random thoughts and musings and frankly, is a lot of fun at the end of the day.  I think that one is there to stay.

The problem with this site is that I rarely have anything to say.  It was intended as an outlet for my more serious ponderings, but since I gave up the web design business, my serious mind seems to have retired.

Any suggestions are welcome!

I have been keeping a track of advertising on Head Rambles. 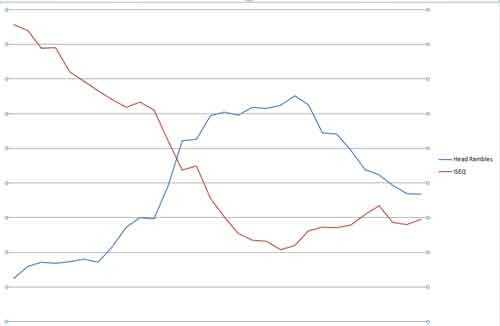 Just out of interest, I plotted earnings against the ISEQ Index of Irish shares over the same period.

Quite a remarkable correlation?

The only problem is that as shares fall, advertising rises.

I just hope the correlation doesn’t hold true for too long?

I like messing around with software, trying new ideas and pushing it a bit beyond the limits.

I saw an interesting idea the other day for people who have Woopra Analytics in their sites, and Google Earth installed.  It’s a very neat integration of the two.

Essentially, all you have to do is add a Network Link to Google earth in the format http://localhost:9565/yoursite.com, obviously entering the appropriate site name.  Give it a low refresh rate (five to ten seconds) and sit back.

The effect is quite mesmerising.

As visitors arrive on your site, so little pegs appear on Google Earth, giving the visitor’s identity and their location. 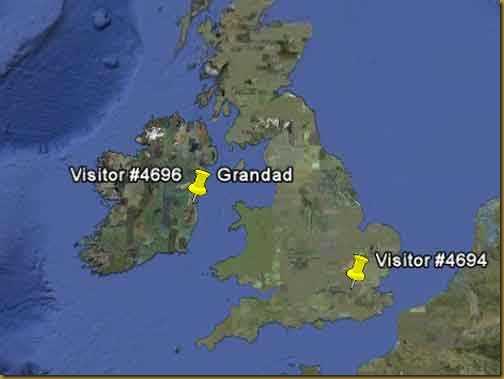 The above snapshot shows three simultaneous visitors, where two are overlapping.

Needless to say, the location is actually the location of the ISP, so for example Grandad appears as a Dublin location, which is incorrect, but is near enough on a world scale.

As an application, it is not really of much value.

But it’s a lot of fun to watch in a busy period!

So the dust seems to have settled on a rather tricky day yesterday.

It started with a cautionary email to warn me that Head Rambles was receiving a lot of traffic and that this was interfering with other sites on the shared webspace.  I had been meaning to move it to its own area anyway so this came as no surprise.

Head Rambles is effectively hosted on three servers – mail, web and database.  The move was simply a matter of moving the files on the web server to a new area.

Copying across the files should have worked, as all references to the database should retain their integrity, which they did.  However, Word Press and its ancillary plug-ins isn’t quite so flexible.  It transpired that there were quite a few references in the database tables to absolute paths.

A typical entry in a record could be something along the lines of the following:

However, moving the site files from webspace 115124 to webspace 120566 could have implications for the site, as the record would then have to read

That aside, the site should have functioned normally, with maybe a loss of functionality in a couple of plug-ins.

For some reason, the site refused to function in its new home.  It was slow, to put it mildly, and while I was desperately trying to find the cause of this, I got another mail from the people in Blacknight.

I must point out here, that I had been trying to sort the problem out on my own.  Blacknight had obviously been monitoring both Twitter (where there were a few caustic comments about the site being down) and the site itself, as they then stepped in and moved the whole site to a new server.

Anyway, the site ran perfectly in its new location (apart from the few changes that had to be made to the database), and we never did discover the cause of the original problem.

I cannot sing the prises of Blacknight highly enough.  They saw a problem.  They solved it.  As they are a large company, they presumably have a fairly healthy workload, yet they dropped all to help a client in trouble, even though I had not wanted to bother them.

So – a huge thanks to Niall, Nils and especially Paul.  And of course to Michele for running the best hosting company in the business.

Sadly, this site has become somewhat neglected of late.

This is due to a number of factors.  The old health hasn’t been the best and I am still involved in trying to wind up my company.  I thought the latter would be a straightforward matter of informing my clients, and then putting a lock on the door.  Life isn’t that simple, apparently.

The main site at Head Rambles is doing quite well at the moment.  In these stringent times, it is becoming more and more of a lifeline to support the ailing income, so it has to be nurtured with great care and attention.

One aspect of blogs [like Grandad, I hate that word with a vengeance] that has me baffled is the RSS business.

After nearly three years fo running Head Rambles and nine years of running my own web based business, you would think I would be up to speed on all aspects, but I’m not.

What confuses me is the concept of Reach vs Subscribers.

Yesterday, for example, HR had 472 subscribers.  That should be self-evident in its meaning and I assume it to indicate that 472 people have subscribed to the feed from the site?  Maybe I’m wrong?

The one that confuses me though is ‘Reach’.  Yesterday, HR had a ‘reach’ of 131.  What the hell does that mean?  Is it that of the 472 subscribers, 131 actually used the link?  Does it mean that 341 didn’t click the link, because they were out shopping or were dead or something?

This is a graph of Subscribers and Reach over a period of time.  As you can see, there are points where Reach [the blue line] has dropped almost through the floor.  What the hell happened at those points?

Also, Subscribers seems to have a life of its own.  I would assume that if ‘Subscribers’ is what I think it is, then it would vary plus or minus a few per day, as people joined or left.  Yet there are occasions where it can drop by as much as 100 in a single day and recover a few days later.  What is going on there?

Any ideas would be welcome……