Dedicated followers of this site (i.e. Me) will have noticed that I have a passing interest in Alexa and its ranking methods.

My main reason for this interest is because Alexa seems to be the benchmark of choice in advertising.  I suppose they have to chose some method of ranking sites, but the choice of Alexa is a little baffling.

I have been charting the progress of several sites over the weeks, to see if I can spot a relationship between traffic an ranking.  So far, the relationship has eluded me.  For example, one of the sites has daily visitor numbers in the single figures, while another has daily visits of around 150, yet the two sites are running neck and neck in the rankings, and in fact the latter site is trailing the former, which is completely illogical.

Some weeks ago, I set up a test site.  It is self hosted, with its own domain, but as yet its existence has not been advertised.  As far as I am aware, there are only two people on the planet who know of its existence.  About three weeks ago, I decided to add it to my Alexa monitoring list.

When I started monitoring it, it had a ranking of 1,341,686, which struck me as being quite high for a site that essentially doesn’t exist.  Over the weeks, it has been climbing the ranks at an alarming rate, and now stands at 620,853.  I have seen quite popular sites that are still ranked in the millions.  What the hell is going on here?

One possible theory is that I am skewing the figures, simply by visiting the site to read the stats.  If that is the case, then I would contend that it’s like judging newspaper circulation by counting the number of times that paper is bought in one particular shop.  If one person is a representative sample of internet usage, then what value are the statistics?

My advice?  Unless you are an advertiser, forget Alexa. 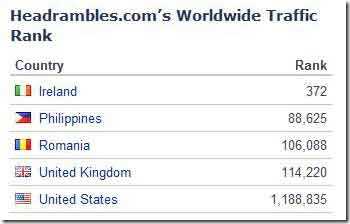 The Philippines accounts for about 0.4% of traffic!!