Many many years ago, I had the idea of putting my Netscape Bookmark file in the Internet.

It was a simple file which I modified slightly to ease navigation. 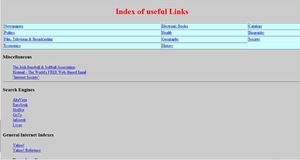 Over a period of months, the file became quite popular as word spread throughout the company where I worked, and people started submitting their own bookmarks.  The file grew, until it reached a stage where I had to create an actual site. 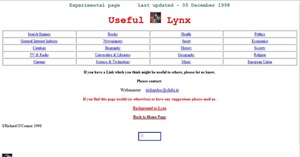 Soon, the site was picked up by the international community, and developed into one of Ireland’s foremost portals.  It had developed its own identity and had grown to a considerable size. 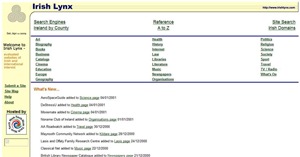 This site was written and maintained in my spare time and had become rather a burden.  Advertising was scarce in those days, and thus I wasn’t able to capitalise on the venture.  It was a labour of love, but it was too demanding.

In 2000, or thereabouts, the site was sold, and was removed from the public domain.  Part of the contract of sale stated that I wasn’t allowed to retain the name of the site (‘Irish Lynx’) but I did retain the data.

It seemed a pity to deny the public the resource that they had been using, so I made public the data under another name, but decided not to maintain it.

Frankly, I forgot all about it!

The directory has been sitting there for the last six years or so, and still gets a lot of traffic, though only a fraction of the traffic the original site received.

The site is now hopelessly outdated.  I would imagine that most of the links in it are dead.  It also take up quite a bit of space on the server.

I think the time has come to give it a decent and honourable funeral?