There are times when words nearly fail me.

There are scum out there who will sink to the lowest depths.

Last night, alarm bells started ringing all over the place.  Two of my websites had been hacked.

One was a community site, which they took over and started using as a distribution point for illegal software.  That I could live with though it was damned irritating.  It was a matter of removing all their stuff and cleansing the site.

The other attack was the one that sickened me though.  They attacked the Jack and Jill website.

To those of you who are not familiar with Jack and Jill, they are a charity that provide respite care for parents of children with disabilities.  I first came across them years ago when I saw their founder, Jonathan Irwin on television.  One thing led to another, and they took Laughingboy under their wing.

They were fantastic.  They provided support where the state wasn’t interested.  They provided advice as well as vital practical support.  I felt I had to do something in return, and I now sponsor their website and hosting.  I am very proud to do that, and wish I could do more.

It incenses me therefore when some low life thinks he is smart and attacks a site like this.  Because of that little bastard, I had to spend half the night stripping the server (because it was crawling with viruses and malicious code), reinstalling all the software, restoring databases and of course changing all the passwords.

By coincidence, Damien Mulley is running a campaign on behalf of Jack and Jill.   I was delighted to see this, and would urge you to head on over, where he will explain it all.  You never know – you might win yourself a nice little prize?

Say that you came from Head Rambles.  I don’t want the glory, so I might as well try to do something for him.

It would make up, in part for last night.

Nobody reads blogs on a Sunday, so this is a good time to post something boring.

As I expected, I have been having some teething problems with this site.  Things rarely go smoothly, and frankly, I worry when they do.

Why wasn’t I surprised?

The theme I am using doesn’t have a built in RSS button, which is a huge omission.  I had to install my own.  Then I had to set up my Feedburner account and that’s where the trouble really started.

As far as I can make out, the Feedburner plugin has some problems with the latest WordPress.  Or maybe it doesn’t?  Either way, I had so many problems that I had to modify the plugin to get it to work.

In the course of this, I had to set up and delete my Feedburner account several times, and this is where the problem occurred.  My button, and my account got out of synchronisation.

It took a bit of twiddling, but I think I have it working now.

If it doesn’t work, just let me know……

I sometimes wonder if I’m a reincarnated Druid.

I have my own little countdown which is slightly in advance of everyone else’s.  While people are shouting “only four days to go”, I quietly say to myself “only one day to go”.

I hate the Winter.  Apart from the foul weather, I hate the darkness and the bare trees.  I resent getting up in the dark, and then the day ending when it is still mid afternoon.  I love the Spring especially, with the colouring in nature and the promises of warmer days ahead.  I love the lengthening days and the miracle of growth all around me.

There is always a little twinge of sadness on June the 21st.  It is the start of the long downhill slide to Winter.

But there is the corresponding delight at the arrival of the 21st of December.  The days may not get noticeably longer for quite a while but there is the great consolation that they aren’t getting any shorter.

Tomorrow, I will celebrate.

I won’t be throwing any parties or getting drunk.  I won’t be stuffing my face with food.

I will quietly greet the day, and my heart will be a little lighter.

And so will the days.

It has been a rough day today.

The Old Goat got up early this morning, and started messing with the servers.

By the time I got up, he had gone out, leaving the servers in a right state.

I haven’t a clue what he did, but I couldn’t get access to them at all.  Most of the sites were throwing error messages all over the screen, and the phone was hopping with irate clients.

I managed to get the sites back up and running again, though it was touch and go for a while.

Then of course, I had to change all the passwords to keep the bastard out.

One of these days, I’ll kill him.

It was my copy of Homepages. 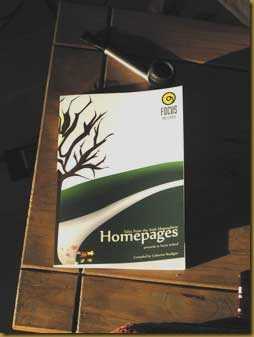 I don’t know quite what I was expecting, but it’s much better than that.

Grandad and I are honoured to be in it.

If you haven’t ordered a copy, you should.  Apart from the proceeds going to charity, it is a damn good buy.

My only problem with it is that there are no comment links at the bottom of the articles.