When I recently installed Mint 12 Lisa, I discovered I had a problem with Filezilla.

My usual method of dragging a file from the remote pane to local caused Filzilla to crash spectacularly.

In Terminal, run the following –

Back in Terminal, run –

That’s all.  Filezilla should now run with no problems.

With thanks to wxpython.org and in particular, Kirk

Footnote:  When I originally published this, I accidentally omitted the instruction about “curl http://apt.wxwidgets.org/key.asc | sudo apt-key add -“.  The fix will work without this line but it will case an irritating popup about security keys each time an Update is done.  Sorry about that!

A couple of weeks ago I installed Linux Mint 12 (Lisa) on this laptop.

It wasn’t without problems as the ATI video card seemed to object.  I tried the two drivers suggested by Mint and neither worked.  It either reverted to a basic GNOME desktop or else presented me with a screen where have the text was randomly missing or pop up windows had their contents screwed up.  In the end I removed all the drivers and for some reason it then worked perfectly.

Since then, I have installed it on two other machines.  The first of those again gave some problems [using a Nvidia card] but once again adding and then removing the drivers seemed to cure the problem.  The third machine [an ATI card] installed perfectly first time without touching the suggested drivers.

My original intention was to run Lisa using the MATE desktop which carries the old Mint Menu.  However, to my surprise I like the new GNOME 3 interface.  It took a couple of days to get used to but I am happy with it now, even though I still try to check the time at the bottom right corner of the screen.

There are a couple of very small niggles that annoy me.  One is the lack of any apparent method to customise the top and bottom bars.  For example, it would be nice to be able to increase their height to make the icons a little bigger and more visible.  There seems to be a general lack of right-click options which is frustrating at times as it means a trip around the houses to find some functions.

One feature I missed straight away was the ability to edit the menus.  In the end I installed Alacarte.  Problem solved.

Generally speaking though, I am happy with 12.  A tip of the cap to the crowd in Mint!

For the last week or so I have been messing around with a couple of pre-release operating systems.

The first one I tried out was Linux Mint 12.  As I am a fan of, and use Linux Mint, I like to know what’s coming down the road.

The most significant change that I can see is the new Gnome desktop. 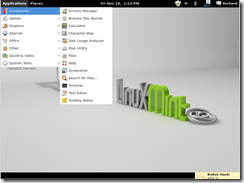 For some reason they have shifted the main menu bar to the top of the screen, and I haven’t found any way (yet) to change its location.  Anyone who has driven a car will know that such items as the steering wheel, brake and accelerator pedals are in much the same position no matter what make of car.  Computer interfaces should follow the same pattern, and finding the menu bar is to me like finding the steering wheel on the passenger side of the car.

However, Mint 12 does offer an alternative interface they call MATE.  I booted into that. 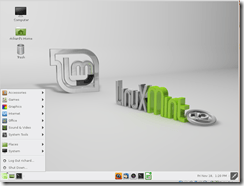 This at least has the menu in its old familiar place, but is a bog standard Gnome menu.  I like the Mint menu system that they currently use and can only hope that it will be imported into Mint 12.

The next system I tried out was Windows 8.

To an old fogey who has been used to everything from Windows 3.1 onwards, this is a massive departure from normality.  The first thing that greets you is a desktop and clock. 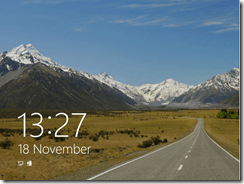 Notice that there is no Start button, or anything resembling a menu?  They are gone.  To get to the next stage you have to scroll with the mouse wheel.  That brings you to a login screen where you do the usual validation.  If you are expecting a normal screen to appear then, forget it.  What you get is a horizontally scrolling screen filled with “Apps”. ( I have a personal hatred of that word App, and seeing it plastered everywhere offends my senses!) 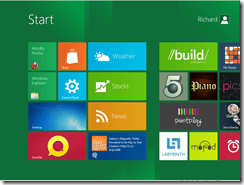 Clicking on any one of the tiles will launch that programme.  If you do want to get to the standard desktop you have to either click on its tile or hit the Windows key.

One thing that has virtually disappeared is the Title Bar.  Run any programme from its tile and the Title Bar is absent.  The problem then is that there is no Minimise, Resize or Close buttons.  I have yet to find a means of shutting down a programme that is supplied with the OS.

Shutting down Windows 8 is another nightmare.  The only way I can find is to go to the tile screen and to click on the User name.  This gives you the option to log out or switch user.  Choosing log out will eventually bring you back to the original login screen and here is where you find the close down button.

I don’t know how close this version is to the final release but as it stands I hate it.  It is full of bells and whistles that look flashy but lack any kind of function or intuitive use.  Extra steps have been introduced for no reason that I can see,.that just make a simple task more complicated.

It looks like I will be staying with Mint 11 for the foreseeable future.

A while ago, I was using Skype (beta 2.2.0.35, 64 bit, running on Linux Mint) and tried to send a file to the other person.  The act of clicking Send File however caused the entire Skype program to crash.

I did a bit of hunting but didn’t find any resolution to the problem. I did find rumours that the problem may lie in a bug in Ubuntu (upon which Mint is based). However I did find a way of preventing the crash.  It is probably the simplest fix I have ever found.

I simply changed the Style.

As I said – the simplest fix ever.

Last night, Herself was browsing the Internet.  She came across a site that claimed that her Javascript was disabled.

The laptop in question is running Firefox 5 on Linux Mint 11.

When I went to check Firefox I discovered that the main menu bar was missing.  The address bar was there along with the favourites bar, but no sign of the all important menu.  I tried some other programmes and they all ran normally, so it was obviously a Firefox problem.

I browsed the Internet and found that that wasn’t much help.

Eventually, by trial and error I found the solution, which is (of course) very simple –

Open a terminal and type ‘firefox –safe-mode’ (without the quotes).

A window will pop up.  Simply select “Reset toolbars and controls’ and that’s it.  Everything will be restored to normal.

While I am on the subject of Firefox, I have been running the nightly version of Firefox 8 for the last week or so.  (whatever happened to 6 and 7?

).  Visually, there is little difference between 5 and 8.  The difference though is in speed.  It really is lightning on steroids.  I started using it occasionally, but it is now my default.  I love it!