For a long time now I have been looking for a way to record directly off the soundcard.  While I had no difficulty with this in Windows, Linux proved a little more elusive.

I trawled the Internet and came across a lot of solutions, such as hot-wiring the speaker socket to the microphone socket, or lengthy sessions with Terminal.

The other day I found the solution I had been looking for, and as I suspected, it was simplicity itself.

My sound editing programme of choice is Audacity.  That gives the option of selecting the source for recording and this is where I was making my big mistake.  The trick is to leave that alone.at its default setting.

Open up Audacity and also Pulse Volume Control.  In Audacity, click the wee drop-down by the microphone symbol and select ‘Start Monitoring’ 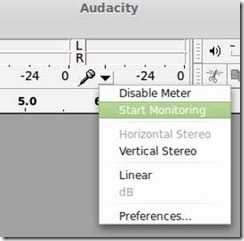 In the resulting screen, you will see Audacity listed as ALSA Plug-in [Audacity]

All that is required now is to make your selection from the drop-down list provided.  Select one that starts “Monitor of ..” and you should be OK.

I just replaced Linux Mint 10 with Mint 11 and to my surprise, Pulse Audio Control was missing.  It took a bit of research but I fond that the package I was looking for was pavucontrol.  I tried installing it from the Software Manager but it kept getting stuck at 12%.  I then tried

I have been running Linux Mint for some time now.

A good friend – Kirk – suggested I try it initially, and I have been using it ever since.

I was talking to Kirk the other night and we got onto the topic of Mint 10 KDE which has been imminent for some time.  He gave me the address from which to download it, which I promptly did.  However, Kirk suggested I just update my existing KDE to 4.6.00, as I only wanted to have a look to see if it was worth switching over from Gnome.  He gave me the address for the software repository ( ppa:kubuntu-ppa/backports ) which I duly entered.

That was when the fun began.

I ran a check to see if there were any updates, knowing that there would be some, as I was running and old version of KDE.  It came up with a list of 380 updates!  The following morning, I told it to install the updates, but it refused, saying that I had a broken package.  Unfortunately it didn’t tell me which one.

I hunted the Internet for a solution to my broken package problem and found several suggestions, none of which worked.  One of the suggestions had been to run Aptitude and supposedly it would at least tell me which package was at fault.  It didn’t but during the process I must have hit a wrong key somewhere because it suddenly announced that it was installing and uninstalling a list of programs.  I don’t know where that came from!

To my disgust, one of the programs that Aptitude removed was Oracle VM VirtualBox which I use a lot.  I tried reinstalling it from Software Manager, but it steadfastly refused.  In the end, I downloaded the package and manually installed it.

At this stage, I was more or less back where I started, but still was none the wiser about broken packages.  I decided to install updates a block at a time, selecting just twenty updates.  That worked.  The strange thing though was that I worked my way through the entire list of 380, and not one update failed.  Weird?

With all the updates installed, I tried to run KDE by logging out and logging in again.  No go.  For some reason, I was only presented with Gnome as an option.  Back to the drawing board.

I can’t remember the exact details, but my next step was to install KDE 4.6.00 directly from Kubuntu.  That worked.  At last. 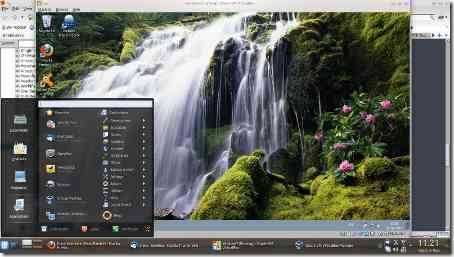 I used KDE for the rest of the day, and it was good.  There were a lot of features I liked, but I won’t be using it.  My distro download (which is now officially released) is tucked away for emergencies, but I won’t be installing it.  Why not?  Partly because I am so used to Gnome at this stage, but mainly because I found KDE to be a lot slower despite this laptop having 4Gb of memory.

Where I would recommend Linux Mint 10 KDE though is for someone who would like to try a Linux distro but is afraid of it being too different from Windows.  KDE 4.6.00 is a lot closer to Windows than Gnome, and would be an excellent introduction to Linux.

For various reasons, I decided to reformat my Linux partition recently.

One of the things I like about Linux Mint is its fast and reliable install.  I had my Mint 10 [Julia] 64-bit DVD already burned so it was simply a matter of banging it into the drive and letting it run.

Everything went as smoothly as I expected and I then set about installing all the applications I use. Again, with Mint, this is utter simplicity, and all that is really required is a little time.

I had forgotten about Adobe Air however.

For reasons unknown, Adobe have no 64-bit version of their Air installer, and any attempt to run the provided adobeair.deb will fail miserably.  However, I had done it before but hadn’t bothered writing down the instructions.  Big mistake!  What was worse, it was a nightmare trying to find the fix I had used before.

The rest of this article has become obsolete, as Adobe have removed Adobe Air 32 bit from their site.

I have an old copy of my modified Adobe Air 64 bit DEB file which can be downloaded from here.  It has worked every time for me so it should work for you!

If Adobe ask me to remove the file then I shall of course remove it, but in the meantime……….

I never did find my old fix, but have found a way around which works very well.  I am writing it up as a reference for the future, and it maybe help others in the same situation.

Download adobeair.deb from the normal location.  This is the 32-bit version so don’t try to run it.

Next, extract the downloaded file into the temp directory –

All that remains now is to create a new DEB file –

Now all that remains is to install the package –

It worked flawlessly for me, and I was immediately able to install Tweetdeck, amongst other things.

I have always considered Linux to be a bit of a geeky system.

I had hoped that with time, the front end would make things simpler, in the same way that Windows more or less made DOS obsolete. That isn’t the case.

The more I have used it, the more I like it. It is extremely fast, solid and also versatile. It is now my default operating system, so all I have to do is switch on the laptop and leave it to boot up. I only have to hover over the keyboard if I want to go into Windows.

In my last post, I mentioned how I was having problems with reinstalling Linux in a virtual file. I still haven’t solved that problem (despite having put an appeal out on the forums), but am developing a couple of theories. One is that apparently a hard disk can only handle four primary partitions? I had never heard this before but it could be the reason for my problem. My hard disk came with three partitions already set up. There is one small one that has an uncertain function. There is another that contains the factory restore code and then there is the main one which is around 320 Gb in size. My first job was to split that into and OS partition and a Data partition, not realising that I had now used up all my four partitions. Some day, I may restore to the factory default and then leave Windows in one partition and Linux in another.

Because I wasn’t able to reinstall, I had to get by by restoring my Linuxmint directory, and that is what I’m working off at the moment. I was also stuck with the size I had originally specified, which was 19Gb. This filled up pretty rapidly leaving me with a setup that lacked flexibility. I hunted the Internet and came up with a solution. Apparently, Linux is able to increase a file size without recreating it. I did say that Linux was flexible?

I tried it out last night and it worked. Or at least it partly worked. This is what I did.

My NTFS Data partition is the one that hold my Linux install. Linux is mounted in a folder called “linuxmint”, in two main files – “root.disk” and “swap.disk”. I can access these files directly from Linux using the path /host/linuxmint/disks/.

Using Terminal as Root I used the following –

The second line is the one that does the main work. It takes a very long time to run, and it is set to increase the size of root.disk by 10Gb. This can be varied by changing the value of “count”.

My problem now is that “root.disk” is 29Gb in size which is exactly what I intended, but when I examine the properties of any directory in Linux, it tells me that the disk size is still only 19Gb. Somehow i have to work out a solution to this little conundrum.

I will say one more thing in favour of Linux –

Having successfully worked with Linux for a while and having grown to like a lot of its features, I decided to take the next step.

Up until now, I had been running Mint in a Virtual File within Windows. I decided it was time to give it its own partition and to do a proper install.

I started off last night by resizing and moving my NTFS partitions. This went without a hitch and I ended up with a nice fat 60Gb of free space on the hard disk.

This morning, I ran another full backup and then started work. The first job was to install Linux in the new partition.

I tried several times, but ran into the same problems, no matter what way I tried to do the install.

I decided to cut my losses. I resized one of the NTFS partitions to fill the vacant space and then went to install Mint in a virtual file again, only this time I would make the file 60Gb instead of the 20Gb I had been using.

Again all went well, and it asked me to reboot to finish the installation.

Immediately I got an error – “No primary partition found”.

Once more I went into the install/uninstall routine, trying out varios settings, all to no avail. This was particularly tedious as the uninstal;l had to be run each time, otherwise I would just have added a new entry each time to the boot-loader.

In the end, I gave up. I didn’t bother with the uninstall, so I was left with the virtual file and the boot loader. Using Windows, I then restored my backup of the LinuxMint folder that I had made earlier.

I’m delighted to say that this worked. I still had to restore a lot of files within Linux, but it is now 99% up and running.

So I have wasted about eight hours and am more or less back to where I was yesterday. Some minor things still aren’t working, but I can live with that.

My only fear now is that my re-partitioning of the hard drive went amok somewhere, causing faulty volume labels or something.

One of these days, I am going to have to do a total manufacturer’s system restore.