Since switching to Linux, I have played around with a few distributions.

Using my Virtual Box I have installed and run various flavours including Suse and Ubuntu.  I wasn’t that happy with Suse at it came across (to me) as being rather clunky.  Ubunto was much better but was so similar to Mint that it wouldn’t be worth changing over.  Better the devil you know, and all that.

Earlier this wee I heard of a new flavour that promised to be a tad different – Ubuntu Natty Narwhal.  I thought I would give it a try.

I had been warned that Natty doesn’t install very well under Virtual Box, so I decided to add it straight to hard disk.  I shrunk one of my partitions to create some space and fired off Natty.  Here I found a strange quirk – everything went very well up to the very last stage of the install.  It had cycled through all the various splash screens and was on the last one that thanked me for installing it.  The progress bar had done all its copying, clearing, installing of Grub and the rest and then came to a halt about three quarters way across the screen.  I waited for about fifteen minutes and decided there was something wrong.  During that fifteen minutes the DVD hadn’t spun up, and the hard disk seemed to pretty quiet as well.  I rebooted the machine and tried again, with the same result.  This time I left it at its three quarters mark and sat back and waited.  This time it installed perfectly but be warned – that ‘sticking’ at three quarters is a false error – it is in fact still installing even though it appears to have stalled.

Natty is different from any other flavour of Linux I have tried before.  I will be honest and say that it is not for the beginner as it functions very differently from either KDE or Gnome. 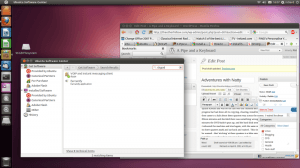 It’s emphasis is very much on using as much of the screen as possible, and therefore there are no such things as menu or status bars, apart from one narrow one at the top of the screen.  Whenever an application is opened, its menu automatically appears in the top bar which is a little disconcerting at first.  The main menu is also nicely concealed and is activated by shoving the cursor to the top left of the screen.

This is only a Beta release of Natty and I appreciate that it will lack some functions.  What I did find very strange was that the Software Centre was quite generous with games, but lacked such items as Skype or VirtualBox.  By adding the standard repositories, I was however able to download all the usual suspects.

I have been playing around with it for a couple of days now, and I am impressed.  It took a while to get used to the repositioning of a lot of items, but practice makes perfect.

I possibly will transfer my allegiance to Natty once the final release is out.  What is even better is the fact that Mint is based on Ubuntu so the two are virtually interchangeable.  Therefore when I am finally setting up Natty, I will specify its current partition as Root, but will specify my Mint Home partition as the new Natty Home partition, remembering to specify the old format (Ext4) and NOT formatting it.  That way, all my documents and other work don’t have to be transferred as they will already be there in the new Natty Home.  I tried this, and it works perfectly, though I have since given Natty its own small Home partition for test purposes.

The only real problem that I have encountered with this new install is that my Grub menu is getting damned cluttered!